During the meeting, the sides expressed gratification with the level of mutual cooperation and discussed its prospects.

The Azerbaijani minister stressed that the Armenian side resorted to disproportionate methods of conducting military operations.

The minister also said that during the war Armenia launched missile strikes on Azerbaijan’s civilian facilities. 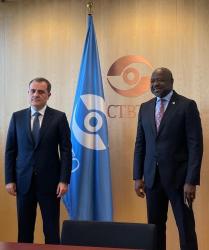