A minute of silence has been held in Azerbaijan as a tribute to the victims of January 20, 1990, Trend reports.

The movement of traffic and pedestrians in Azerbaijan’s cities was stopped for a minute to honor the tragedy victims, while the minute of silence was accompanied by horns of ships in the Baku Bay, as well as in Baku Metro and railway trains.

On the night of January 19-20, 1990, the Soviet army forces entered Baku to suppress the masses protesting the USSR-supported Armenian aggression based on territorial claims against Azerbaijan. The result was an unprecedented tragedy for the country. 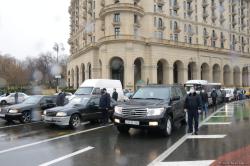