Welcoming Gafarova and the delegation, Lavrov expressed confidence that the visit would be a valuable contribution to the further development of the Russian-Azerbaijani relations.

"The Russian side highly appreciates the fact that the delegation of the newly elected Azerbaijani parliament made one of the first visits abroad to Russia. Generally, such visits to Russia by high-ranking government officials, including new Azerbaijani foreign minister, are very important in terms of exchanging views on issues of mutual interest," Lavrov said.

Lavrov noted that during the talks with Azerbaijani officials, a decision was made to intensify joint efforts to resolve issues raised during the telephone conversation between the presidents of the two countries, Vladimir Putin and Ilham Aliyev, adding that Russia intends to further deepen relations with Azerbaijan in all spheres, including diplomacy.

Lavrov noted the importance of the relations of the Azerbaijani parliament with the State Duma of the Federation Council of Russia, the participation of the delegations of the two countries in international parliamentary organizations.

Gafarova said that the Azerbaijani-Russian relations have centuries-old traditions and have always been distinguished by the characteristic features.

“Close cooperation has been formed between Azerbaijan and Russia, which is one of the first countries to recognize our independence, which over the years has risen to the level of strategic partnership,” Gafarova added. “Regular contacts and trusting relations between President of Azerbaijan Ilham Aliyev and President of Russia Vladimir Putin give dynamics to our relations, which can be characterized as relations of strategic partners.”

“Along with the ideal political dialogue, economic relations continue to develop dynamically between our countries,” Gafarova said. “Russia is one of the main trade partners of our country.”

Focusing on the rapid expansion of the geography of interregional cooperation between the two countries, the speaker of the Azerbaijani parliament noted that Azerbaijan is actively cooperating with the subjects of Russia - Dagestan and Tatarstan, Astrakhan, Saratov, Sverdlovsk, Ulyanovsk, Vladimir, Volgograd and other regions.

Gafarova noted that the parliaments of the two countries also play an important role in the development of bilateral relations between Azerbaijan and Russia.

“Relations between the parliament of Azerbaijan and the Federal Assembly of Russia, based on the provisions of the Cooperation Agreement dated January 9, 2001, are becoming more dynamic,” Gafarova said. “The national parliamentary delegations of Azerbaijan and Russia traditionally support each other on the most important and topical issues and successfully interact within various international organizations.”

“Friendship groups operate in the Azerbaijani parliament and the Federal Assembly of Russia, and there is a permanent bilateral inter-parliamentary commission between the structures,” Gafarova said.

Gafarova stressed that Azerbaijan is the country with the biggest number of ethnic Russians in the South Caucasus, adding that there is a solid legal base between the two countries, consisting of more than 200 bilateral documents.

“These documents include the Treaty on Friendship, Cooperation and Mutual Security between Russia and Azerbaijan, as well as the Baku Declaration on Friendship and Strategic Cooperation,” Gafarova added.

She pointed out that the Armenia-Azerbaijan Nagorno-Karabakh conflict continues to create serious obstacles to any development in the region.

“Azerbaijan is committed to resolving the conflict peacefully. The conflict must be resolved within the territorial integrity of Azerbaijan on the basis of the UN Charter, the relevant UN Security Council’s resolutions and the Helsinki Final Act.”

“In general, amid the ineffective activity of the OSCE Minsk Group, Russia, being the co-chair of this group, actively participates in the settlement of the Nagorno-Karabakh conflict,” Gafarova noted. “The Russian side has made great efforts in this direction. Moreover, the absurd statements recently voiced by Armenian Prime Minister Nikol Pashinyan about "seven conditions", which, being an option of compromise, can be discussed, if Azerbaijan recognizes the right of the people of Nagorno-Karabakh to self-determination, shatter all efforts of the world community to resolve the conflict peacefully.”

“Pashinyan's statements on the accession of Nagorno-Karabakh "authorities" to the negotiation process cannot be criticized enough,” Gafarova stressed.

"The Armenian leadership must not forget that in the modern world it is impossible to hide the fact of the occupation of Azerbaijani lands, presenting it as" the common security system of Armenia and "Artsakh",” speaker of the Azerbaijani parliament said.

“In particular, Armenia won't be unable to hide the fact of occupation after it itself initiated the battles in the direction of Azerbaijan’s Tovuz district and aimed outside Karabakh at infrastructure facilities that are of exceptional importance for the region as a whole,” Gafarova said.

“All this is serious violation of international humanitarian law, including the Geneva Convention of August 12, 1949 and its Additional Protocol of June 8, 1977, and is classified as a war crime,” speaker of the Azerbaijani parliament said.

“The illegal resettlement of Syrian and Lebanese Armenians to the occupied Azerbaijani territories, contrary to these conventions, is of particular concern,” Gafarova said.

In connection with the Nagorno-Karabakh conflict, Sergey Lavrov said that Russia, as the co-chair of the OSCE Minsk Group, supports the solution of the problem and spares no effort in this area.

“Pashinyan’s words about Nagorno-Karabakh create obstacles on the way to the process of the conflict settlement, this is Moscow's official position,” Lavrov stressed.

Gafarova expressed confidence that Russia, as the co-chair of the OSCE Minsk Group, will do everything possible to mediate for the settlement of the Nagorno-Karabakh conflict.

Further, during the meeting, other issues of mutual interest were also discussed.

The visit of the parliamentary delegation of Azerbaijan to Russia continues. 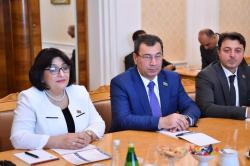