Holiday gifts have been presented to more than 165,000 low-income families on the occasion of World Azerbaijanis Day of Solidarity and the upcoming New Year at the initiative of president of the Heydar Aliyev Foundation Mehriban Aliyeva.

The project was implemented in partnership with State Oil Company of Azerbaijan.

The holiday gifts were distributed to low-income families in all regions and cities of the country.

The first event was held in Garadagh district. In his remarks, head of Garadagh District Executive Authority Suleyman Mikayilov hailed the importance of the charity campaigns organized by the Heydar Aliyev Foundation.

Another event was held in the capital's Sabunchu district. Addressing the event, head of Sabunchu District Executive Authority Adil Aliyev hailed the charity projects carried out by the Heydar Aliyev Foundation both in the country and abroad.

The event participants thanked Azerbaijani President Ilham Aliyev and president of the Heydar Aliyev Foundation Mehriban Aliyeva for their care for low-income families.

The charitable events were also held in Narimanov, Khatai, Khazar, Binagadi, Nizami, Pirallahi, Sabail, Yasamal districts, as well as a number of cities and regions of the country. 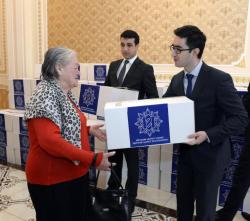