The large-scale 5th Yoga and Health Festival has been held at the Seaside Boulevard in Baku.

Every year all yoga fans of the city gather at a big festival to celebrate a significant event - International Day of Yoga.

The festival brought together the best yoga teachers and all those who care about health and self-knowledge, Trend Life reported.

The event was co-organized by YARAT Contemporary Art Space and the Seaside Boulevard.

The festival featured a variety of yoga directions and programs for beginners. Each guest of the festival was able to choose the yoga practice that he or she liked the most.

This year, the festival was curated by Sabina Shahi, the founder of the Yoga Shahi studio.

The 5th Yoga and Health Festival was devoted to the preservation of health and nature, unity and equality. The festival was held under the motto "For the benefit of yourself, to help others!".

The festival's program included 108 sun salutations, an official presentation from an Indian yogi, a variety of styles of practice, various traditions and techniques, lectures on the most relevant topics in this field, oriental arts, fitness and dancing, art, vegan food and yoga goods, ethnic concert and many other interesting and useful events. 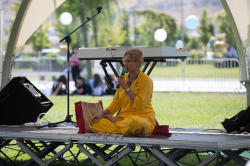