Azerbaijan’s Mine Action Agency is demining formerly liberated Sugovushan settlement and Talishkand village in Tartar region for the construction of power transmission lines there, the agency employee Ramin Azizov has told Trend.

Azizov said that antipersonnel and anti-tank mines have been found and neutralized on the road from Tartar region to Sugovushan settlement and Talishkend village.

Meanwhile, head of Azerishig’s education centre Araz Mammadov has said that "Smart Grid" concept, introduced on the Azerbaijani territories liberated from the Armenian occupation, is being implemented in Sugovushan settlement as well.

“The work on laying power transmission lines with a capacity of 35 kV is underway in Sugovushan. Under  Azerbaijani President Ilham Aliyev's relevant decree, Azerishig company accelerated the work in Sugovushan, carried out within its project in the Nagorno-Karabakh region."

"The electric power supply will be restored in the settlement soon,” he said.

Another expert from the Mine Action Agency Shahin Allahverdiyev said that the road leading to Sugovushan was mostly mined with plastic mines. He added that it is difficult to find these mines as they have a large blast wave.

"More than 2,500 anti-personnel and anti-tank mines, which are mostly plastic, were found on the territory of the village. The Armenians deliberately mined the territory with such mines," Allahverdiyev said.

He noted that other types of booby traps were found on the territory of the village.

"These are a special wire connected to 240-mm mortar shells, which are controlled remotely. These traps have been detected and neutralized," the expert added. 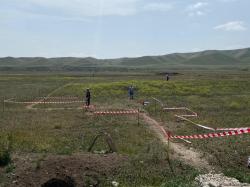 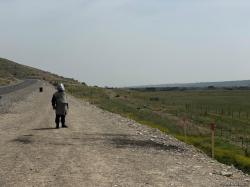