Three more anti-personnel mines produced by Armenia were found in Novruzlu village of Aghdam district, in which Head of the Mechanical Irrigation Administration of Aghdam district Hafiz Azimzade was wounded as a result of the mine explosion on March 3, Khalig Zulfugarov, representative of the National Agency for Mine Clearance of Territories of Azerbaijan, told Trend on March 4.

“Some 39 anti-personnel mines, as well as eight TM-62 P2 mines, were found and neutralized in the area during the search work,” Zulfugarov added.

The employees of the Agency continue the search work. The work was carried out to neutralize about 100 TM-62 P2 mines in the Aghdam district.

The Agency asks citizens not to visit the liberated territories due to the threat of mines. 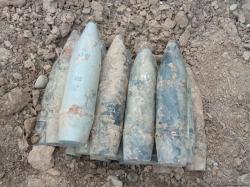