A film "Sughra and her sons" will be screened at 14th Asia Pacific Screen Awards. The film has been nominated in the category "Best Screenplay".

Established in 2007, the Asia Pacific Screen Awards are the region's  highest accolade in film where cinematic excellence shines. With films from 70 countries and areas in the region, APSA honours filmmaking that best reflects its cultural origins and the diversity of the Asia Pacific.

Around 38 films from 25 countries have been nominated for the prizes. The winners will be announced in Australia on November 11

"Sughra and her sons" is co-produced by Baku Media Center and Buta Film in partnership with "Salar Film" (Germany) and "Arizona Production" (France).

The film tells the story of people living in a village in Azerbaijan during World War II. The film directed by Ilgar Najaf is expected to represent Azerbaijan at international film festivals.

Most of the film shooting process took place in the village of Sugovushan, Dashkesan region. The film has an intriguing storyline. Sughra, along with his two sons, lives in a mountain village. Her husband is involved in the battles of World War II. For a long time, Sughra did not receive any news from her husband. A this time, her son received a notice about conscription to the army. 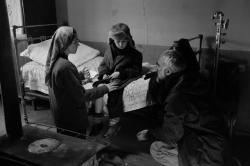 National films to be screened in Moscow [PHOTO/VIDEO]