Some of the 20th century's greatest films have been screened as part of the Baku Jazz Festival 2021.

The film screenings took place at the Art Tower Gallery on September 11-12 with the support of the Arts Council Azerbaijan, Azernews reported.

The film critic Ulvi Mehti invited jazz and cinema lovers to plunge into the great films with exciting plots.

Based on the festival's motto "Jazz of Victory", the choice fell on films symbolizing the victorious spirit of art.

The ensemble was named  after the homonymous members' club in the Buenavista quarter of Havana, a popular music venue in the 1940s. It included many veteran musicians who performed the popular styles of the time, such as son, bolero and danzón.

The band's eponymous album was released in September 1997 , quickly becoming an international success, which prompted the ensemble to perform with a full line-up in Amsterdam and New York in 1998.

Furthermore, the Mexican Ambassador to Azerbaijan Rodrigo Labardini shared his impressions of the trip to Cuba in the second half of the 90s. He also spoke about the concerts of the revived Buena Vista group by director Wim Wenders.

The story is "about a jazz saxophonist (Robert De Niro ) and a pop singer ( Liza Minnelli) who fall madly in love.

At the end of the film screenings, Ulvi Mehti thanked the audience for the recreating the atmosphere of the Baku's retro cinemas. 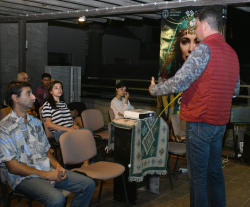