Mugham evening has been solemnly held as part of the Gabala Music Festival. 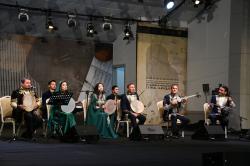