Shahbulag Castle in Aghdam is considered one of the most significant monuments in Azerbaijan's history.

Built in 1751-1752 by Panahali Khan, this historical site was named Shahbulag (Shah's spring) after a nearby spring bearing the same name.

The 18th century monument is actually the inner tower of the large castle complex, which was built of local building materials, limestone and rock.

The complex consists of houses, markets, baths and mosques and was surrounded by protective walls and guard towers.

Only the castle itself and the mosque on its northwestern end survived. The castle has a rectangular architectural design and its external walls are reinforced with circular and semicylinder towers.

During the reign of the khan, it was protected by two-story tower-like premises.

The top floor was intended for the khan with a stone staircase leading to it from the castle yard. The castle was built from half-hewn whole stones.

The heads of media resources and NGOs, bloggers and public activists visited the castle on March 13. They were informed about the history of the monument. 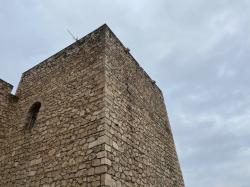