Uzbek Film Festival has opened its doors to cinema lovers. The event is co-organized by the Azerbaijan Ministry of Culture and Uzbekkino agency.

In his speech, Azerbaijan's First Deputy Minister of Culture Vagif Aliyev stressed that that the holding of events such as the Film Week provide an opportunity to get acquainted with the Uzbek culture and contributes to the strengthening of cultural ties  between the two countries, Trend Life reported.

He noted that Azerbaijan and Uzbekistan pay great attention to the development of the cinema industry.

Uzbek ambassador to Azerbaijan Sherzod Fayziyev emphasized the importance of the Uzbek Film Festival. He also noted that 10 films, including 6 feature and 4 documentary, are planned to be screened as part of the festival.

Among them are films of the historical and dramatic genre, singing love, patriotism, fidelity. One animated film created by based on Uzbek folk tales.

Speaking about the festival, Sherzod Fayziyev emphasized that Uzbek Film Festival provides a great platform for dialogue with the audience.

He noted that Uzbek film industry has been rapidly developing. More than 80 films are produced annually, thanks to the conditions created in the country.

Many films become participants and winners of international film festivals.

The diplomat expressed confidence that  the Uzbek Film Festival in Azerbaijan, as well as the past, in September this year, the Days of Azerbaijani cinema in Uzbekistan will further strengthen the relations between the two fraternal peoples.

The film festival will last until November 24. 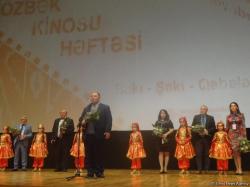