Russian humorist, TV presenter, showman and singer Maxim Galkin has successfully performed in Baku as part of his concert tour.

Spectacular show took place at the Heydar Aliyev Center, bringing together the fans of the comedian.

Saying it is honor for him to greet the Azerbaijani president and the First Lady in this hall, the showman added that he often visits Baku and that the city is becoming more beautiful every year.

Maxim Galkin captivated the audience with a stand-up show. He entered the stage by performing a song that created a positive mood in the hall.

During the concert, Russian humorist delighted the audience with parodies and songs from repertoires of Russian and European singers, including Anna German, Ludmila Zykina, Lev Leshenko, Toto Cutugno, Joe Dassin and others.

Maxim Galkin then performed a song "Blue Eternity" from the world-renowned Azerbaijani singer and composer Muslim Magomayev`s repertoire. His performance left no one indifferent.

Maxim Galkin began to take his first steps on the stage after school at the Moscow State University, at the University's Student Theater.

In June 1994, he performed in the program "Debuts, Debuts, Debuts". Despite such a young age, the team warmly welcomed him.

After working in "Fountains of love for one's neighbor," Maxim realized that his parodies of politicians and statesmen were best for him. The career of the artist went up the hill. Galkin was noticed by the director of the Moscow State Variety Theater, and she invited the future star to work with her.

His first award, "Triumph", Galkin deservedly received in the early 2000s. He took the position of Dmitry Dibrov as the TV presenter of the "Who Wants to Be a Millionaire?" quiz game. Then followed the "Slavic Bazaar in Vitebsk", the "Golden Ostap and a couple of other awards.

The year 2001 was marked by the beginning of a concert tour across Russia and abroad.

After achieving a high level in the role of a parodist, there was a test in a new role, as a singer.

The song "Whether or not to be," performed by a duet with the Prima donna, was only the beginning of a creative path. This was followed by numerous joint performances at various concerts, celebrations and holidays. 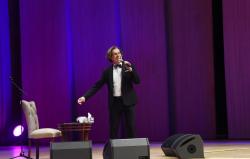