Architecture has always distinguished itself from other forms of arty as it plays both a functional and an aesthetic role.

The Land of Fire has so many incredible buildings that it can be hard to know which are truly above the rest. The following  famous architect changed the way we think about buildings.

For many years, Rasim Aliyev was the chief architect of Baku city. He has created some of the best buildings and projects throughout the country. From modern to historical places, he designed a truly legendary buildings.

Rasim Aliyev is an excellent artist, who creates beautiful portraits. His works  are well known both in Azerbaijan and abroad.

The 85th anniversary of honored architect has been solemnly marked at the International Mugham Center.

His book "From past to future" was presented as part of the event.

He emphasized that Rasim Aliyev is a prominent representative of Azerbaijani architectural art.

Chairman of the Committee for Architecture and Urban Planning Samir Nuriev praised his activities. He noted his spectacular  works, including the mausoleum of poet and playwright Huseyn Javid in Nakhchivan, buildings of Heydar Aliyev International Airport in Baku and Nakhchivan Airport.

Chairman of the Board of the Azerbaijan Architects Union Elbay Gasimzade stressed his significant contribution to architecture. 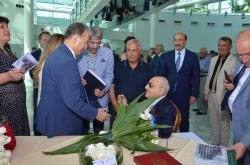