The book "The Testament to God" by the Azerbaijani poetess, Honored Worker of Culture Khazangul Huseynova was published in Ukraine.

The book, translated into Russian, contains works about Azerbaijan, its beauty and traditions, poems on patriotic, historical, religious themes, as well as vandalism of the Armenian occupants, Trend Life reported.

The work was translated by Nijat Mammadov, editor - Salim Babullaoglu. Note that this is the third book of the poetess, published abroad - the book "Ekvebi" was previously published in Georgian, and "Bitmeyen Hazan" - in Turkish.

Hazangul Huseynova was born on December 17, 1947 in Borchaly (Georgia). She graduated from school with a gold medal and with honors from the chemistry and biology department of the Ganja State Pedagogical University. 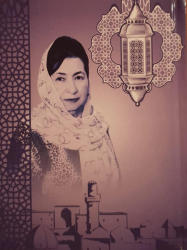