“The Steppe Man”, a movie by Azerbaijani filmmaker Shamil Aliyev has been named “The Film of February Month” at the 6th Virgin Spring Cinefest.

Thus, the film was nominated for the Golden Galaxy Award. The awarding ceremony will be held in the city of Kolkata, India in October, Trend Life reported.

“The Steppe Man” tells a story of a young steppe man who lives in remoteness from the city, closely tied to nature. His father teaches him the subtleties of life in the steppe. Soon after his father's death the young man meets a girl from a city. Their meeting becomes a new page in his life, a step to a big life unfamiliar to him before.

It was filmed at the “Azərbaycanfilm” studio named after J.Jabbarli, with the support of Azerbaijan's Ministry of Culture and Tourism.

Virgin Spring Cinefest is the platform that every filmmaker needs, in order to showcase and get recognitions for their film.

The main objective of the film festival is to support independent filmmakers through reviewing, judging, marketing, and distribution networking,

The films are privately screened every month and evaluated by a team of experts in the industry.

The monthly winners will then compete to be screened at festival's annual event. The event aims to create a strong relationship between filmmakers, producers and distributors from all over the world. 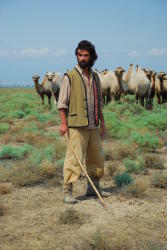