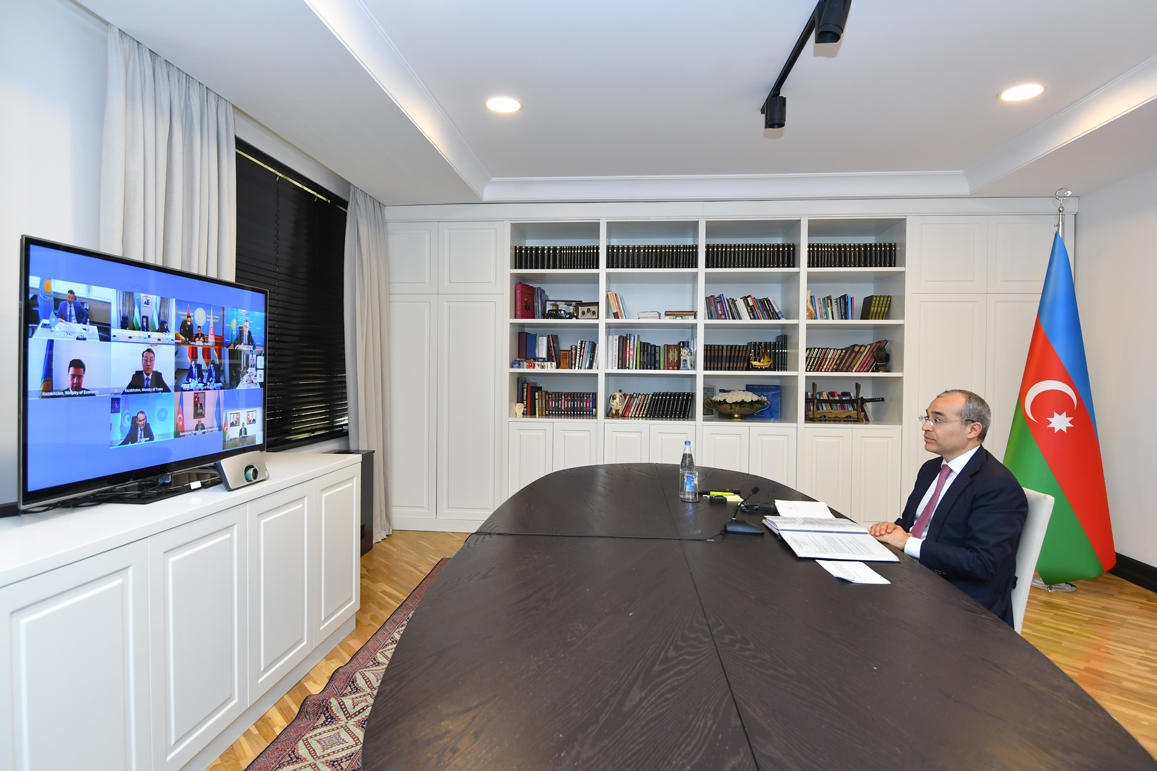 The Ministers of Economy and heads of customs services of the Cooperation Council of Turkic-Speaking States (Turkic Council) and observer countries discussed several issues and measures during and after the pandemic in a video-conference meeting on May 6.

The video conference was aimed to identify areas for joint action to implement the issues raised by the heads of state at the extraordinary summit of the Turkish Council held at the initiative and chairmanship of President Ilham Aliyev on April 10.

Moderated by Azerbaijan's Minister of Economy Mikayil Jabbarov, the meeting concentrated on the current economic situation in the partner countries, the development of joint proposals and practical measures against the negative socio-economic effects of the COVID-19 pandemic, as well as further strengthening cooperation in relevant fields in the post-pandemic period.

Mikayil Jabbarov stressed that the number of cases of coronavirus infection in Azerbaijan has been limited as a result of timely varied preventive measures taken under the leadership and direct control of President Ilham Aliyev. “Azerbaijan, which is a model of a well-thought-out and targeted policy, positively differs in this regard”, he noted.

The Minister informed his counterparts about operative and systematic measures implemented, first of all, in order to protect people's health based on close state-citizen solidarity, aside from that, to reduce the impact of the pandemic on the national economy, to provide support to entrepreneurs and employees operating in affected areas, to keep jobs, to ensure social protection of the population, as well as to prepare a real basis for the application of a new model of economic development in the post-pandemic period.

In order for the effective use of the advantages generated by bilateral free trade agreements between member states of Turkic Council, for the development of e-commerce, Azerbaijan’s Minister of Economy proposed to implement measures for the mutual recognition of electronic signatures, use Azerbaijan’s experience in the establishment of the Turkish Trade House, as well as preparation of a catalog of available border and transit regimes in the member countries in the framework of the Turkish Council. Besides, Mikayil Jabbarov proposed to inform member States about any urgent or planned changes in the transport and transit regime, as well as to create an online information exchange system that will allow tracking of goods and procedures in the member countries in the near future.

Recalling the establishment of the Joint Investment Fund and promotion of Turkic Trade and Industry Chamber during the extraordinary Summit held by the heads of States of Turkic Council in order to remove the negative effect on trade and investments in the member countries, minister Mikayil Jabbarov noted that the establishment of such a fund will give a broad impetus to the development of entrepreneurship in the member countries, especially small and medium-sized businesses, the creation of new jobs, support for innovation, and ultimately the overall economic and social development of the countries by increasing mutual investment opportunities.

The minister said that Azerbaijan is ready for providing any support to establish the Joint Investment Fund in Baku.

Speaking about the digital economy, Mikayil Jabbarov recalled the decision to establish a branch of the Fourth Industrial Revolution Center of the World Economic Forum in Azerbaijan earlier this year. The minister also stressed that necessary measures will be taken to make the Center of regional significance so that the fraternal countries can benefit from its activities.

Mikayil Jabbarov noted that the formation of state reserves for food products is of special importance. In this regard, it is advisable to form a single list for all member countries.

During the video conference, the heads of relevant agencies of the participating countries gave information about measures taken in their countries to reduce the negative impact of the COVID-19 pandemic on economic development and trade relations, and made proposals for joint measures within the Turkish Council. In addition, at the meeting, the sides also exchanged views between the heads of customs services of the Turkish Council member and observer countries, and the heads of customs authorities voiced their proposals on the implementation of practical steps during the pandemic.