The cycle race dedicated to Azerbaijan's victory in the 2020 Nagorno-Karabakh War brought together journalists and media representatives.

The competition started at Republican cycle track, near the "January 20" metro station.

In their remarks, the speakers stressed the role of the state in the development of sports and fruitful leisure among young people.

They noted that the Azerbaijani athletes successfully represented the country at the international area.

TV presenter of AzTV Samira Mustafayeva was host for the event.

The winners were awarded with medals, diplomas and prizes from sponsors.

Notably, a series of the chess tournaments, table tennis, football and paintball will be held until November 8 as part of the "Ilhamlı qelebeler" Sports Festival. 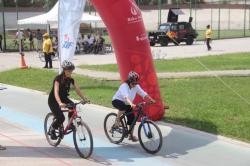