At the meeting held in Baku on August 30, Bayramov congratulated the new co-chair on his appointment. Khovayev noted that his visit was of a familiarization nature.

The Azerbaijani foreign minister briefed the Russian co-chair about the current regional situation, steps taken by Azerbaijan in the post-conflict period, the possibility of normalizing relations with Armenia on the basis of international law with the elimination of the occupation factor.

He said that the revanchist position displayed by Armenia had no prospects. Bayramov stressed the importance of the parties taking advantage of the opportunities for cooperation.

The sides exchanged views on the implementation of the provisions of the trilateral statement and the realization of confidence-building measures.

The peace agreement stipulated the return of Azerbaijan's Armenian-occupied Kalbajar, Aghdam and Lachin regions. Before the signing of the deal, the Azerbaijani army had liberated around 300 villages, settlements, city centres, and historic Shusha city. 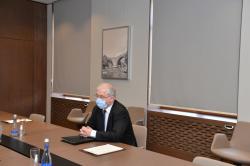