A gala concert timed to the Day of Solidarity of World Azerbaijanis and the New Year has been held at Culture Center named after Hajiaga Abbasov.

The festivity was greeted by the audience with great interest. The spectators sang along with the artists.

The evening turned out to be bright, interesting and gave the audience a truly New Year mood.

Notably, December 31 marks the Solidarity Day of the World Azerbaijanis. The last day of December is annually celebrated as a day of Azerbaijani unity.

The main idea of this holiday is the unity and solidarity of the Azerbaijanis from all over the world, respect for national and spiritual values, as well as belongingness to the historical homeland.

The New Year celebration is a family holiday and most Azerbaijanis spend this day at home, surrounded by their nearest relatives and friends, talking about past and laughing on some funny stories.

The table is served always with traditional national dishes. There is a tradition to unite beyond a delicious lunch and right before the midnight they give a toast to the year.

Traditionally a New Year Tree (like Christmas-tree) is decorated in a house at approach of December 31 which is removed only after the Old New Year passes January 13.

Azerbaijan meets New Year with fireworks at the Baku Boulevard and start after the Clock Tower chimes midnight.

Every year thousands of people gather in the city center to view spectacular fireworks and celebrate the beginning of New Year. 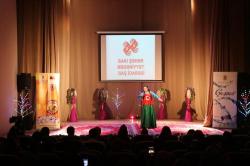