Those who have heard him playing the piano, or his classical works, know that Arturo Sandoval is an outstanding musician, one of the brightest, many-sided and recognized performers of our time.

Addressing the event, the host of the evening, the teacher at the Azerbaijan National Conservatory, jazz columnist Tofig Hasansoy informed the public about the important stages in the creative path of musician.

Arturo Sandoval, the protege of jazz legend Dizzy Gillespie, was born in Cuba in Artemis, a small town near Havana, on November 6, 1949.

As a twelve-year-old boy in Cuba, Sandoval played trumpet with street musicians. He helped establish the Orquesta Cubana de Musica Moderna, which became the band Irakere in 1973.

He is one of the world's most recognized musicians playing the jazz trumpet and flugelhorn.

Sandoval is also known as a performer of classical music, regularly performing with leading symphony orchestras of the world. He is the author of the concert for the pipe "Concert for Trumpet and Orchestra".

With his virtuosity, the musician has won the recognition of the most famous conductors, composers and symphony orchestras all over the world.

"Arturo Sandoval’s performance can be heard in recordings with many musicians, including Dizzy Gillespie, Woody Hermann, Tony Bennett, Frank Sinatra, Rod Stewart, Alisia Keys and many others. He also created music for many famous films," said Hasanov.

The host of the evening also noted that Sandoval’s biography became the basis of the TV film "For Love or Country: The Arturo Sandoval Story" (2000), where Andy Garcia starred as the main character.

Tofig Hasanov stressed that the concert was held with the support of the U.S. Embassy in Baku.

In his speech, William Gill expressed his gratitude to the concert organizer, General Director of Premier LTD Art Management Nazakat Gasimova and the Heydar Aliyev Palace.

Afterwards, Arturo Sandoval appeared on the stage. The audience gave him a big round of applause.

Arturo Sandoval endeared the listeners with heartfelt songs. His performance on the pipe is worthy of special praise.

Watching the energetic performance of the musician, it was hard to believe that he would turn 70 in November.

He charged the public with his incendiary energy, which never stopped applauding solo improvisations of the musician and his trumpeter band.

Arturo Sandoval informed the public that he visited Baku in the 1970s, and that he was happy to come back here again. He also noted that the city impressed him with its beauty.

At the end of the concert, the public did not let the musicians go for a long time. After that, the musician posed for photos with his fans and signed autographs.

The concert has been organized by Premier LTD Art Management with support of the US Embassy in Azerbaijan. 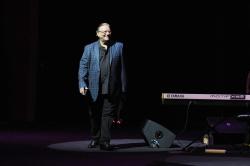