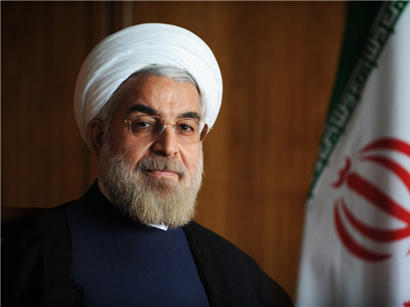 Point-to-point inflation rate has dropped from 52 percent to 33 percent in recent months and it will continue declining till the end of the year, Iranian President Hassan Rouhani said at a news conference on Oct. 14, Trend reports citing IRIB.

“Our economic growth rate will be positive till end of this Iranian year [March 21, 2020],” he added. "Employment hit a record this summer; 843,000 people were employed.”

Rouhani noted that unemployment rate in Iran has fallen by 12.3 percent this summer compared to 10.5 percent in same period last year, which testifies to Iran's economic success.

Referring to the export and import index, the president noted more favorable conditions than last year. “The trade balance of Iran was negative $1.5 billion in the first six months of last year, which is much higher than the negative balance of $300 million in the current year,” said Rouhani.

Referring to the prospects of Iran-Europe relations in the nuclear deal, Rouhani said the United States made a mistake when it left JCPOA.

“The Islamic Republic of Iran made a reasonable decision to follow its commitments to JCPOA,” the president said. “Someone expected Iran to leave the deal and [wanted] to refer the case to the [UN] Security Council. We did not leave the deal, so the responsibility is on America.”

“The remaining five countries including Britain, Germany, France, China and Russia were set to compensate America's vacuum in JCPOA,” Rouhani added. “We have good relations with Russia and China, and they made a lot of efforts, but the three European countries did not fulfill their promises.”

“Iran's reaction is aimed at gradual diminishing the commitments in three steps,” the president said referring to reduction of Iran's commitment to JCPOA.

“Today, IR-6, IR-4 and IR-2 centrifuges are operating well, and our IR-9 centrifuge will start working soon,” he announced.