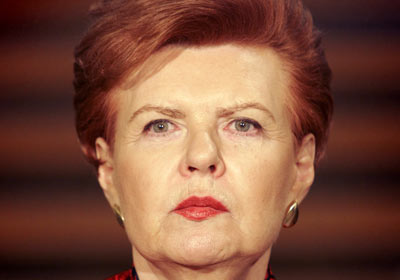 It is necessary to expand the political dialogue in the world in order to prevent bloodshed, Latvia's ex-president Vaira Vike-Freiberga said at the second Global Shared Societies Forum in Baku on April 28.

The second Global Open Society Forum that is being held in Baku is a suitable platform for such a dialogue, according to Vike-Freiberga, the co-chair of the Nizami Ganjavi International Center and President of the Club of Madrid.

She went on to add that the dialogue between various nations and countries is a part of the mission of the Club of Madrid, which was created about 10 years ago.

"Those who have gathered at this forum, intend to lead the world forward, to the future. And everyone has his own opinion, which we want to hear," she said, adding that Club of Madrid works on social projects.

"We should continue the dialogue to define the mechanisms for maintaining the territorial integrity and to respect for human personality, freedom of speech and freedom of assembly," she added.

In an interview with Trend and the Azerbaijani State Committee on Work with Diaspora, Vike-Freiberga also said she would like to learn the Azerbaijani language, if the life was a little longer.

Vaira Vike-Freiberga also touched upon the creativity of eminent Azerbaijani poet Nizami Ganjavi saying Latvia learned about him during the Soviet period, at the same time Western people got familiar with Nizami's manuscripts. Europeans and Americans interested in art, evaluate Nizami as a brilliant personality.

"Unfortunately, there is no complete translation of his Khamsa (five long narrative poems). Translation of the Khamsa to English, French, German, Russian, Chinese and Spanish is important for me. Naturally, it is hard to translate the poetry, which is 900 years old. But this surely should be done. I would like to conduct research on the poetry and structure of Nizami Ganjavi's works as I am interested in poetry," Vike-Freiberga added.

The forum is being attended by over 150 prominent public and political figures from 54 countries, former heads of states and governments, who are the members of the Nizami Ganjavi International Center, Club of Rome and Club of Madrid.

The forum's agenda includes such issues as foundations of open societies, conflict settlement methods in difficult situations, multi-governance for ensuring sustainable development process and the need for institutional frameworks, as well as other important issues.

The forum is planned to hold broad discussions on such issues as practical work in the area of domestic economic growth policy, creation of conditions for high-quality education and other social services, strengthening the role of women in society, as well as the natural resources for sustainable development and the role of global boundaries, clean technologies and unity of "green energy".