President of the International Business Forum (IBF) Erol Yarar, Chairman of the Board of the Association of Independent Industrialists and Entrepreneurs of Turkey (MUSIAD) Mahmut Asmali and the representatives of the delegation who are on a visit to Azerbaijan visited the Alley of Martyrs, Trend reports.

The guests first laid flowers at the graves of Azerbaijanis killed during the January 20 events, as well as revered the memory of the martyrs of the first Karabakh War.

Afterwards, the delegation members visited the Turkish Martyrs' Cemetery. The Quran was recited and prayers were made for the souls of the Caucasian Islamic Army fighters who died for the territorial integrity of Azerbaijan and the liberation of Baku, the martyrs of January 20 events and Karabakh war.

The 25th International Business Forum (IBF) will be held in Baku on Nov. 15. Some 550 businessmen arrived from Turkey to participate in the forum. The prospects of the Azerbaijani economy, process of making investments and other issues will be discussed during the forum.

Trend news agency, Day.Az and the TURKIC.World media project are the official media partners of the IBF. 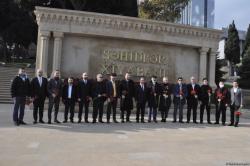