A ceremony of sending hundreds of volunteers to the military service was held at the Azerbaijani Binagadi branch of the State Service for Mobilization and Conscription on Sept. 30, Trend reports.

Young people, as well as those seeing off these young people, had a high fighting spirit. Volunteers were sent to the military units by special transport. 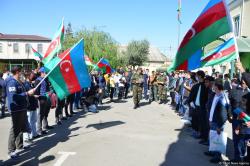