Azerbaijan is upgrading its military units in line with the Action Plan for 2020.

It was reported that the storages for large-sized military equipment, a fuel-supply point and an open area for testing were established in the vehicle park of the military unit.

Hasanov got acquainted with the conditions in the vehicle storages, as well as in the technical control, maintenance and repair points equipped with new equipment that are located in the park and gave relevant instructions.

Azerbaijan has been actively strengthening its armed forces in recent years. It's army is equipped with modern weapons from the best manufacturers.

Azerbaijan ranked 23rd globally for the volume of imports of weapons in 2014-2018. The country spent $22,7bn on defence-related products in 2009-2016, thereby becoming Europe’s largest weapons importer, according to Bloomberg.

Azerbaijan joined the NATO-led "Partnership for Peace" (PFP) programme in 1994, as well as the NATO Planning and Review Process (PARP) in 1996.

Azerbaijan’s Defense Ministry supports the Office of the Personal Representative of the OSCE Chairperson-in-Office to conduct a ceasefire monitoring exercises on the Line of Confrontation of the armed forces of Armenia and Azerbaijan as well as on the state border. 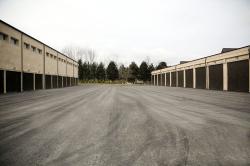