The visit focuses on strengthening cooperation between the Foundation and the country and preserving the material and cultural heritage of the Turkic national minorities living in Poland - Tatars and Karaites.

During her visit to Poland, Gunay Afandiyeva met with the Azerbaijani Ambassador to Poland Nargiz Gurbanova and the Turksih Ambassador Cengiz Kamil Firat.

The sides discussed the importance of strengthening relations between the Turkic-speaking peoples, as well as the impact of the steps to be taken in this direction on the development of the culture of the Turkic world.

Gunay Afandiyeva also met with students of the University of Warsaw studying the Azerbaijani language and teachers of the faculty of Turkology functioning there.

During her visit to university, she informed the students about the International Turkic Culture and Heritage Foundation which carries out activities for the promotion and protection of cultural values of the Turkic world.

President of the Foundation talked with students and professors about the centuries-old history, rich heritage of the Turkic people.

The meeting participants stressed the importance of  future joint events and projects for expanding ties. 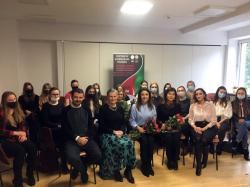