As part of the celebration, young artists presented the 5th-18th centuries miniatures for the poet's "Khamsa".

In their remarks, public and cultural figures stressed the role of Azerbaijan's national leader Heydar Aliyev in promoting Nizami's legacy.

In 1981, the poet's 840th anniversary was celebrated at a high level. In honor of the 850th anniversary of the poet, 1991 was declared the Year of Nizami by UNESCO.

Moreover, the 870th anniversary of Nizami Ganjavi was successfully celebrated in Azerbaijan, Italy, France, India, Russia and other countries.

The report "Great Leader Heydar Aliyev and Propaganda of Nizami Ganjavi's Legacy" was also read as part of the event.

Young actors of the Sheki State Drama Theater delighted the audience with the scenes from "Khamsa".

The celebration was followed by book and video presentations. 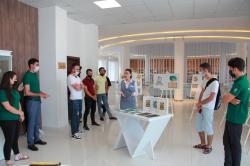