Young ballet dancers have gathered at Baku Boulevard to an open-air master class by talented national dancer Farid Kazakov. The master class with students of "1001 nights" dance studio in Baku was held in a warm and friendly atmosphere.

"I am always glad to share my knowledge and skills with the younger generation. First of all, I want to note the high professionalism of the participants of the master class. These are very talented and hardworking kids dreaming of ballet, stage and high art. Of course, this is the merit of their teachers, and in particular, the artistic director of the school, Doctor of Philosophy in Art History, Associate Professor of the Azerbaijan State University of Culture and Arts, Ophelia Zeynalova," Kazakov told Trend Life.

The dancer expressed his hope on holding more joint projects with the dance school.

"It is very pleasant to realize that there are gymnastics and dance schools of such high level in Baku. I am always ready to hold such creative meetings and master classes for future ballet dancers and contribute to the creative, professional development and prosperity of the future of Azerbaijani choreography, "Kazakov said.

After master class, the dancer signed autographs to all participants.

Farid Kazakov has been recently named the country's best young dancer. He won Khazar National Prize 2020 for his professionalism and devotion to dance art. The dancer is being chosen the youngest professional dancer in Azerbaijan for the second year in a row. 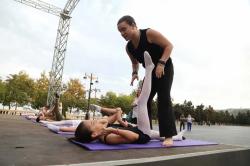