A documentary "One Life, One Love", dedicated to eminent Russian poet, state prize-winner Andrey Dementyev has been screened at Nizami Cinema Center.

Andrey Dementyev’s last visit to Azerbaijan was five years ago, when he came to the country to participate in an event dedicated to the 200th anniversary of Mikhail Lermontov.

The film director stressed that new films would be shot in the framework of the joint cooperation with the Heydar Aliyev Foundation. Each of these films would be presented independently.

Later, the guests watched the film. 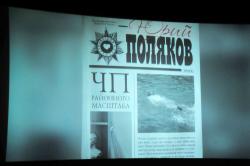