An exhibition of foreign artists has opened in Baku as part of the "Maiden Tower. To Be a Woman" Contemporary Art Festival.

The curator of the project, Sabina Shikhlinskaya stressed the importance of the project in further strengthening of culture between the countries.

The festival topic was linked to the 100th anniversary of the liberation of Azerbaijani women.

At the beginning of the 20th century in the context of important historical and political events, the first women liberation movement was launched in Azerbaijan and with the establishment of the Azerbaijan Democratic Republic, it became the first Muslim country to grant election rights to women, as early as in 1918.

A women's role is making its greatest impact in our society. Nowadays women are playing a major role in many important areas.

The project initiated and curated by Honored Artist of the Republic of Azerbaijan Sabina Shikhlinskaya. "Maiden Tower. To Be a Woman" festival was organized and implemented in partnership with several diplomatic missions in Baku and government institutions and cultural and art organizations.

All cultural events in the framework of the festival were open for public - local residents and foreign guests. 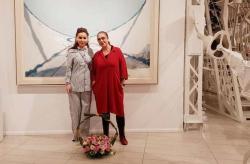