A general meeting of the Azerbaijan National Academy of Sciences (ANAS) held election of the ANAS president on June 8.

Academician Akif Alizadeh was re-elected as president of the National Academy of Sciences.

Akif Alizadeh was elected president of ANAS in 2013. Previously, he served as its vice-president.

After the announcement of the election results, Akif Alizadeh made a speech.

"In the future, I will make every effort to do everything in my power to achieve the goals set for us," Alizadeh said.

"President of Azerbaijan Ilham Aliyev has set important tasks for science in the country. Science in Azerbaijan should move forward. The fulfillment of these tasks is the main way of development of our science. We must further deepen the reforms carried out in the Academy, and expand the path of the revival of science. This is the biggest issue facing us," Alizadeh said. 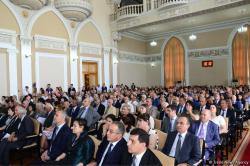 Almost all of Karabakh mosques completely destroyed by Armenians - ANAS