The funds exceeding forecasts by 415 million manat ($244 million) were transferred to the Azerbaijani state budget through the Ministry of Taxes from January through November 2019, Trend reports referring to Azerbaijani Deputy Tax Minister Sahib Alakbarov.

Alakbarov made this statement at the press-conference held in Baku on Dec. 27.

“Over 103,000 new taxpayers have been registered this year,” the deputy tax minister added. “In general, the total number of taxpayers has exceeded 1 million people.”

“The great progress has been achieved in the registration of taxpayers in the agricultural sector over the past four months,” Alakbarov added. “During the reporting period, about 75,000 taxpayers were registered in this sphere. This will result in an increase in tax revenues."

The deputy tax minister noted that tax revenues from January through November 2019 exceeded the figures of last year by 518 million manat ($304 million). 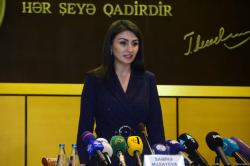 Another online service for business to be launched in Azerbaijan [UPDATE]

Number of people registering business online up in Azerbaijan [UPDATE]

Ministry talks tax evasion by some entrepreneurs in Azerbaijan