The Azerbaijani Defence Ministry has reported that the commission, which has recently been set up under Defence Minister Zakir Hasanov's relevant order, continues to receive and consider the applications from demobilized persons.

The commission, which operates at the Training Centre of the Azerbaijani Armed Forces considered 532 appeals within two days and took relevant measures to resolve them.

The mobile group of the commission, operating in Fuzuli region, considered 96 appeals. Of them, 45 were resolved on the spot, and appropriate measures were taken to resolve problems raised in other appeals.

The media representatives also took part in the process to cover the activity of the commission in the local media.

On December 25, 2020, President Ilham Aliyev signed a decree on dismissal of servicemen called up for mobilization. Under the decree, the servicemen called up for military service based on the president’s decree dated September 28, 2020, will be gradually dismissed from military service on mobilization from December 25, 2020, through April 15, 2021.

The hostilities between Azerbaijan and Armenia resumed after that latter started firing at Azerbaijani civilians and military positions starting September 27, 2020. The war ended on November 10 with the signing of a trilateral peace deal by the Azerbaijani, Russian and Armenian leaders. The peace agreement stipulated the return of Azerbaijan's Armenian-occupied Kalbajar, Aghdam and Lachin regions. Before the signing of the deal, the Azerbaijani army had liberated around 300 villages, settlements, city centres and historic Shusha city. The Azerbaijani army declared a victory against the Armenian troops. The signed agreement obliged Armenia to withdraw its troops from the Azerbaijani lands that it has occupied since the early 1990s. 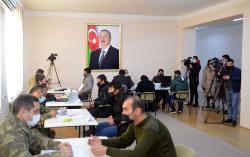