Azerbaijani ambassador discusses situation in Karabakh with his Montenegrin counterpart 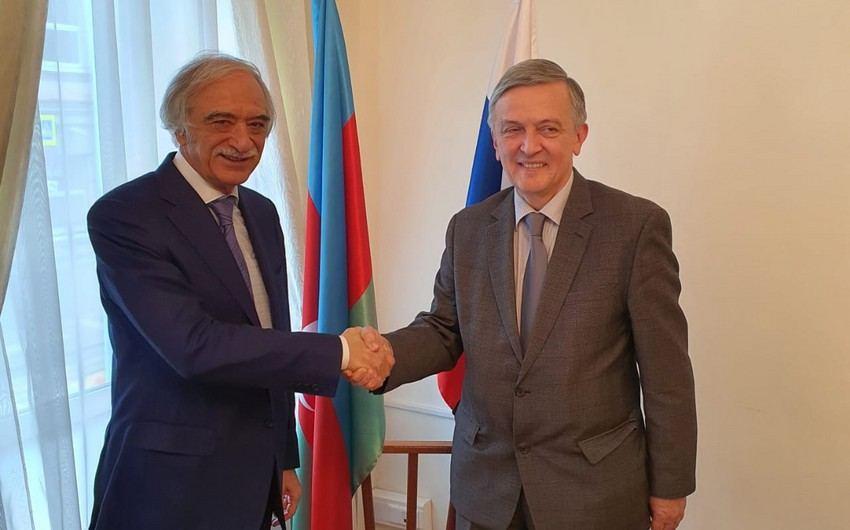 Ambassador of Azerbaijan to Russia Polad Bulbuloglu received the newly appointed Ambassador of Montenegro to Russia Milorad Shcepanovich by his request on October 13, Trend reports with reference to the press service of the embassy.

Congratulating his colleague on his appointment to Russia, Bulbuloglu wished him success in his diplomatic mission and informed the opposite side about his activities as a dean of the diplomatic corps accredited in Russia.

During the meeting, the sides highlighted the current state of bilateral relations between Azerbaijan and Montenegro, the importance of their further deepening, and the availability of sufficient potential for this.

The ambassadors also noted that close cooperation between the two countries and mutual support at the international level testifies to the growing development of relations.

Speaking about the Armenian-Azerbaijani Nagorno-Karabakh conflict, Bulbuloglu acquainted his counterpart with the history of the conflict, legal aspects, and consequences, as well as with the military operations carried out by our army to force the Akkpant state to enforce peace in the Nagorno-Karabakh region.

Bulbuloglu informed Shcepanovich about Armenian provocations, shelling of settlements and civilians in cities far away from the front line, noting that the war crimes committed by Armenia against Azerbaijan resulted in a large number of civilian casualties.

The ambassador noted that attacks by the military-political leadership of Armenia on civilians, and gross violations of humanitarian law, are the basis for international responsibility and must be condemned by the world community.

According to Bulbuloglu, the current situation has arisen precisely because Armenia disregards the relevant resolutions of the UN Security Council, the requirements of documents adopted within international regional organizations, proposals made during decades of negotiations within the OSCE Minsk Group, and the calls of the co-chairing countries, included in the group, about the inadmissibility of the status quo, as well as because of the irresponsibility of the current leadership of the occupying country.

Thanking for the reception and the information provided, Shcepanovich stressed that his country supports the territorial integrity of Azerbaijan and is always ready for cooperation.