An Azerbaijani delegation led by Parliamentary Speaker Ogtay Asadov participated in the spring session of the Inter-parliamentary Assembly of the Commonwealth of Independent States (IPA CIS).

The session opened in Saint Petersburg on March 27, where participants discussed a question of establishment of the International Day of Parliamentarism, results of monitoring of the last year's referendum in Kyrgyzstan, and also the organization of monitoring groups in election campaigns held in 2017 in the CIS member countries, Azertac reported.

Heads of parliaments of the CIS member countries adopted the statement on the occasion of the 25th anniversary of Inter-parliamentary Assembly. In the statement, it is noted that the IPA CIS has the considerable potential for expansion of the international parliamentary cooperation, actively acting as the platform for bilateral and multilateral interaction both between the member countries and with the international organizations.

At the meeting, Ogtay Asadov was awarded medal of the organization devoted to the 25th anniversary of IPA CIS.

On the same day, the 46th plenary session of Inter-parliamentary Assembly of the CIS took place.

Interaction within the Commonwealth plays an important role in strengthening of inter-parliamentary relations of member countries, expansion of economic partnership, he said.

Asadov also spoke of the prospects of multilateral cooperation in cultural, humanitarian, scientific, trade and other spheres. He emphasized that for further improvement of activity of the organization ‘it is necessary to resolve the conflicts existing in the post-Soviet space’.

Besides, Asadov met with Speaker of Russia’s Federation Council Valentina Matviyenko on the sidelines of the IPA CIS spring session.

“The development of Russian-Azerbaijani relations is a result of hard work and we may be proud of that,” Matviyenko said at the meeting.

She also spoke of the economic, cultural, humanitarian relations between Russia and Azerbaijan, further highlighting the importance of the annual Baku International Humanitarian Forum.

Asadov, in turn, said that a solid legal basis existing between the two countries contributes to the development of relations in all areas, including trade, economy, agriculture, energy and culture. He said the two countries have signed more than 200 documents covering different areas.

The sides also exchanged views over the prospects for inter-parliamentary relations between the two countries. 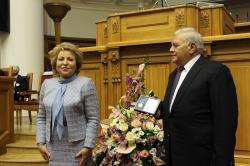