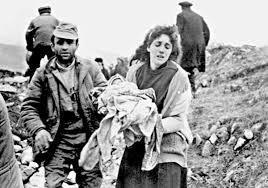 US Minnesota State has declared February 26 as Azerbaijani Day after Khojaly genocide of 1992 committed by Armenians during the Nagorno-Karabakh war, the Azerbaijani State Committee on Work With Diaspora has reported.

The declaration reads that the majority of Azerbaijani Minnesotan community are descendants of survivors of the Khojaly genocide.

It is also stated in the declaration that the Azerbaijanis living in Minnesota, preserving their native language, rich cultural and spiritual values ​​and traditions, contribute to the local culture by promoting them.

The committee has described the signing of this declaration as the success of Azerbaijanis living in Minnesota in promoting the truth about their country.

The signing of the declaration was initiated by President of the Azerbaijani Association of Minnesota Gunel Rallis.

It should be noted that in 2016, the Minnesota State House of Representatives adopted a resolution on the 24th anniversary of the Khojaly genocide.

Another US state - Florida - has declared February 26, as the day of remembrance of the Khojaly genocide.

The relevant decree has been signed by Florida's Aventura Mayor Enid Weisman.

The statement issued on behalf of Weisman herself and the Aventura City Commission, reminds that over 600 innocent people, including women and children, were killed in the massacre committed by the Armenian armed forces against the Azerbaijani civilians on the night of February 25 to 26 in 1992.

The document was adopted based on President of the Florida Azerbaijani-American Cultural Association Tohfa Eminova's appeal.

"International human rights organizations, Human Rights Watch, named the tragedy as the largest massacre in the region... It is emphasized that more understanding, communication and tolerance are needed among people all over the world," the committee said, quoting the statement.