The State Art Gallery has opened a virtual exhibition to honor the representative of the anti-fascist Resistance movement Ahmadiyya Jabrailov.

The exposition was prepared in accordance with the order of the President Ilham Aliyev on the 100th anniversary of Ahmadiyya Jabrailov.

Supported by the Cultural Ministry, the exposition includes photographs of the hero from the family archive, as well as artworks dedicated to the Second World War from the funds of the State Picture Gallery.

The virtual exhibition is available on social networks of the State Art Gallery.

Refusing to join the Nazis, he decided to escape and rejoin the Red Army. Ahmadiyya joined the Maquis of Cabertat in 1944.

His bravery was belatedly recognized in 1966, when President General de Gaulle made his second visit to the Soviet Union. By this time, he had returned to Sheki, but General de Gaulle’s request to see him resulted in overnight fame.

Nicknamed "Chargo", Ahmadiyya also toured the regions of France that he helped to liberate, and met many of his Resistance friends. His life was ended at the age of 74 by a car accident in Sheki.

The story of Ahmadiyya Jabrayilov was highlighted in many books and documentaries. One of the streets in Sheki is named after him.

There is also a house-museum of Ahmadiya Jabrayilov in Sheki, opened by his son, Javanshir Jabrayilov.

In November 2007, the French embassy in Azerbaijan, Baku French Cultural Centre and Sheki Museum organized the exhibition "He was called Armed Michele in France" dedicated to the hero. Photos, documents and film about  the life of Ahmadiya Jabrayilov were presented at the exhibition 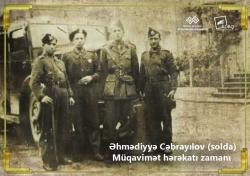