Shooting of a documentary film about Azerbaijani music therapist Zuleykha Abdullayeva has been completed in Turkey.

Zuleykha Abdullayeva is a professional pianist and music therapist who can treat psychological and physical illnesses by just playing piano.

The film tells of her extraordinary ability, as well as her two patients from India and the Czech Republic. In the movie, Abdullayeva gives concerts for wide audience, as well as holds individual music therapy sessions.

“This is a very personal film. We want to make a poetic movie about an amazing person who changed the lives of many people. I want the whole world to know about Zuleykha’s talent," said the film director and producer Rashid Aghamaliyev.

The film was shot in co-production of three countries: Azerbaijan (Peri Film), the Czech Republic (Oliel Company) and Georgia (Chai Khana), with the support of the Film and TV School of the Academy of Performing Arts in Prague.

In August 2019, the film "Zuleykha" became a member of the CineDOC Summer School, organized by the CineDOC Tbilisi International Documentary Film Festival (Georgia).

The film director and producer is Rashid Aghamaliyev, the cameramen are Nina Scamborova (Slovakia) and Raashi Metkari (India), the film editor is Jorge Sanchez (Spain), and the sound engineers are Berk Tugcu (Turkey) and Juras Karaka (Belarus).

Abdullayeva studied at the Azerbaijan National Conservatory in the class of musicology (1981-1986). During her studies, she developed an interest in music therapy, which contributed to her spiritual growth.

After moving to Turkey, she continued to study the influence of music on the human body. During this period, Abdullayeva received the Reiki Master title and graduated from the Complex Holistic Healing School.

Zuleykha Abdullayeva also was trained in art therapy and a number of breathing techniques. 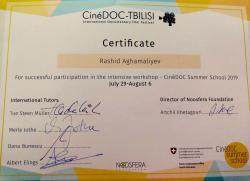