The "From Nature to History" First International Ceramics Symposium kicked off in the city of Shaki on May 20.

The ceremony was attended by Shaki city officials, representatives of ABAD pavilion, ceramic masters and artists.

The main goal of the symposium is to exchange experience to increase the level of professionalism among the attendees and local ceramic artists. The project aims at strengthening and promotion of the cultural traditions as well as at familiarizing the participants and visitors of the symposium with contemporary trends in ceramics art.

At the opening ceremony, it was stressed that the international symposium will glorify Shaki in the world and will trigger a new stage in the development of art and crafts.

It was emphasized that great attention is paid to the preservation of cultural heritage and propagation of nation's rich culture.

The orders issued by the head of state on the protection of the historical part of Shaki have given a powerful impetus to the beginning of a new stage in the development of tourism.

Also, work is underway to include Shaki historical center, including the Khan Palace, into the list of UNESCO World Heritage Committee.

It was noted at the opening ceremony that Shaki was chosen as the Art Capital in 2010. The city was also declared the Cultural Capital of the Turkic World 2016. It was also included in the UNESCO Creative Cities Network (UCCN) in 2017. Moreover, Shaki is a member of the League of Historical Cities.

In 1967, the Yukhari Bash State Historical-Architectural Reserve was established to preserve the cultural heritage located in the historical part of the city.

The reserve of 283 hectares includes many monuments of world and national importance. There are 84 historic and architectural monuments in Shaki. The Church of Kish founded in the 1st century and the Shaki Khan's palace of the 18thcentury are included in the list of world-famous monuments.

Shaki is also one of the areas where art and crafts are developed. At present, more than 200 artists are engaged in 18 types of folk applied art in Shaki.

Rufat Elchiyev, director of ABAD (ASAN Support to Family Business), stressed at the symposium that Azerbaijan was known throughout the history as the land of craftsmen and it gave many examples of art to the world. He emphasized that these types of art reflected the entire spirit, mood, spirituality, life, culture of Azerbaijani people with their diversity.

"The masters have inspired the beautiful nature, history and culture of Azerbaijan, creating beautiful works and art examples. Our ancient art forms such as alchemy, pottery, woodworking, blacksmithing, carpet weaving, sericulture, hat-making and shebeke art still florish as the carrier of the spirit of our people," he said.

Elchiyev further stressed that one of the priorities of ABAD is support to the families working on decorative-applied folk art. He noted that there are currently 10 ABAD ethno-boutiques operating for the sale of souvenirs illustrating art samples belonging to the country's regions.

ABAD director noted that various handmade artworks, souvenirs presented at ABAD ethno-boutiques highlight the country's ancient history and culture. Thanks to these points of sale, the great variety of Azerbaijani arts is spread all over the world.

The head of ABAD stressed that since the ancient times, Azerbaijani people have been a creative nation. During archeological excavations, ceramic products and ancient stoves were found throughout the country, mainly in this region. For this reason, the opening of the first Ceramics Center and holding of the "From Nature to History" First International Ceramics Symposium in Shaki is not accidental.

Speaking at the event, the co-coordinator of the ABAD Ceramics and Applied Art Center in Shaki Mir Teymur Mammadov said that ceramics plays a special role in the history of every nation.

"Ceramics is the oldest and most reliable carrier of history, chemistry, physics, and magnetism. Ceramics has a strong position in the modern science, industry, medicine and other areas of human life," he said.

Zinaida Blizniuk, Ukrainian participant of the international symposium, thanked the event organizers for the invitation and the conditions created for participants.

Then, participants of the First International Ceramics Symposium were introduced to artists. The symposium participants also got acquainted with the conditions created in the ABAD Ceramics and Applied Art Center.

The opening ceremony ended with a colorful show. The symposium will last until June 2. 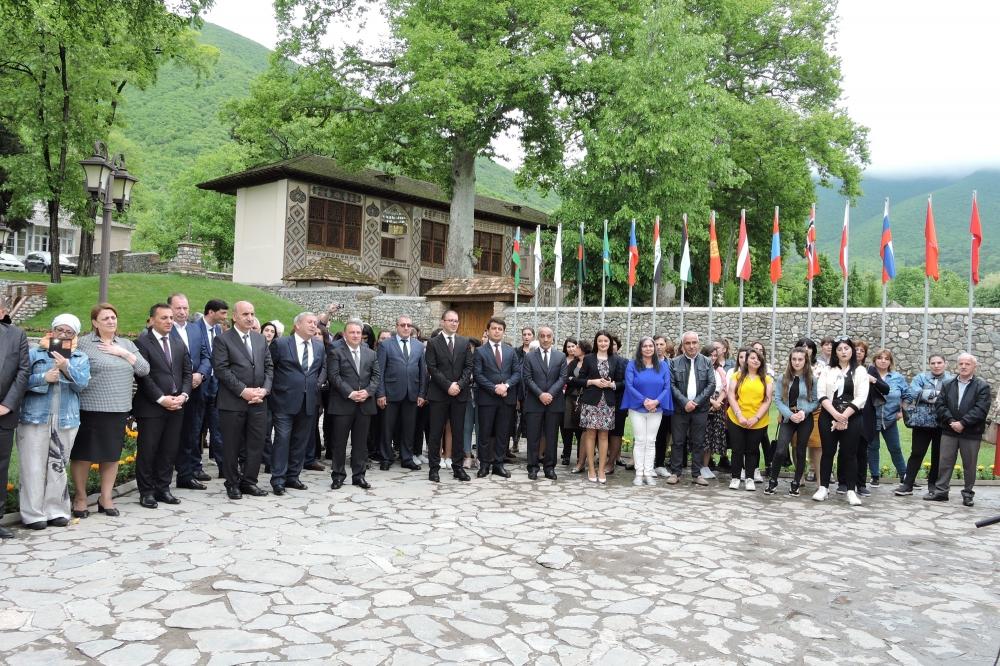