This solo show also marks the beginning of the representation of the artist by Deweer Gallery, Azertac reported.

Mahmudova was born in Baku, Azerbaijan in 1982 and lives and works in Baku. She graduated from Central Saint Martins College of Arts and Design in London.

Her paintings can be situated in the long Azerbaijani tradition of oil painting, especially in her attitude towards expressive and abstractive forms, her interest in the landscape and free use of color.

Mahmudova practices an intuitive form of painting that incorporates fragments of the real and erroneous traces of memory through an aggressive, almost performative and physical painterly act. The landscape-like paintings are dissected by forceful lines, an unexpected use of materials, intrusive forms and a strong depth of color, all of which emerge in an almost organic manner throughout her intense creative process.

She also participated in numerous group exhibitions such as the exhibition ‘Vita Vitale’ in the National Pavilion of Azerbaijan at the 56th International Art Exhibition, La Biennale di Venezia, Venice, Italy (2015), ‘Candy mountains and oil coasts’ in the Perm Museum of Contemporary Art in Perm, Russia (2015), ‘Love Me, Love Me Not’ at the 55th Biennale di Venezia, Venice, Italy (2013). She also took part in group shows at the Kunsthistorisches Museum Neue Burg in Vienna, Austria, in the MAXXI, the National Museum of 21st Century arts in Rome, Italy (2012-2013), the Multimedia Art Museum in Moscow, Russia (2012-2013) and at Philips de Pury & Company in London, UK (2012-2013).

Aida Mahmudova is the Founder and Creative Director of YARAT, which promotes the national art both in Azerbaijan and internationally. 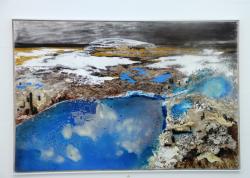