The winners of the 26th Azerbaijan and Baku Championships in Rhythmic Gymnastics at the National Gymnastics Arena in exercises with a rope and a ball among juniors were named on Aug. 31, Trend reports.

The award ceremony of winners and prize-winners was held.

Lala Gebeibeyova ranked first, Alina Gezalova ranked second, and Fidan Yusifzade ranked third in the exercise with a rope. The gymnasts are representatives of the Ojag Sport club. 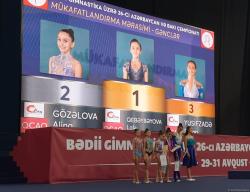