The first week of the "Week of Diplomacy" project entitled "44-day second Karabakh War and the post-war foreign policy of Azerbaijan", organized by the Azerbaijani Foreign Ministry and ADA University, was held on July 12-17, Trend reports.

The event, which was held with the participation of representatives of volunteer organizations and movements operating in Azerbaijan, is scheduled to continue next week.

The meetings are planned to be held with high-level guests to inform the participants within two weeks about Azerbaijan’s foreign policy during the Karabakh War, as well as the historic victory of the glorious Azerbaijani troops headed by the victorious supreme commander.

Vice-rector of ADA University Fariz Ismailzade made a welcoming speech at the official opening ceremony, which took place on July 12 as part of the first day of the project.

During the opening ceremony, Assistant to the President of Azerbaijan, Head of the Foreign Policy Affairs Department of the Presidential Administration Hikmat Hajiyev delivered a speech as the main guest.

A lecture by Azerbaijani Deputy Foreign Minister Khalaf Khalafov and a speech by the Turkish ambassador to Azerbaijan, Cahit Bagci were heard on the second day of the project - July 13.

Moreover, a visit was organized to the Military History Museum under the Azerbaijani Ministry of Defense.

During the visit, the participants of the diplomatic week reviewed the exhibits of different periods of the history of the Azerbaijani troops, listened to the speeches of officials of the Ministry of Defense and participants in the Karabakh War and also watched a short film created by the Ministry of Defense dedicated to the historical victory in the Karabakh War.

The participants met with the Azerbaijani Minister of Culture Anar Karimov on the third day of the project - July 14. An online meeting with the Permanent Representative of Azerbaijan to UNESCO Elman Abdullayev was held on this day.

The meetings were held with Deputy Foreign Minister of Azerbaijan Elnur Mammadov, Ambassador of Pakistan to Azerbaijan Bilal Hayee and Consul General of Azerbaijan in Los Angeles Nasimi Aghayev on the fourth day of the project - July 15.

Then the guests watched the "Ebedi ezamiyyet" film, which was prepared by the Baku Media Center through the support of the Heydar Aliyev Foundation and produced by Arzu Aliyeva.

A meeting was held with Assistant to the President of Azerbaijan, Head of the Department of Economic Issues and Innovative Development Policy Shahmar Movsumov and Azerbaijani ambassador to Croatia Fakhraddin Gurbanov on the sixth day of the project - July 17.

During the meetings held during the week, the guests of the "Week of Diplomacy" answered numerous questions of the volunteers.

The project participants had a picnic on the weekend in the park of ADA University.

The project is planned to continue next week as well. 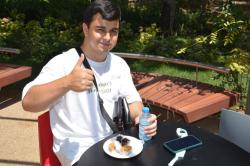