The year 2020 is drawing to a close - a good time to look back at an eventful year. This has been a fruitful year for Azerbaijan's talented dancer Farid Kazakov.

Over this time, Farid Kazakov has participated in many large-scale projects. Let's take a look at some of the dancer's most memorable projects.

The young dancer presented a patriotic video "My Azerbaijan" to the music of Muslim Magomayev and poems by Nabi Khazri.

In his video, Kazakov performs in a military uniform with the Azerbaijani flag in his hands.

His brilliant performance was highly appreciated at Solo Star Russia 2020 competition, where he took first place.

Speaking about his victory, Kazakov stressed the importance of showing Azerbaijan's superiority not only in the political and military arena, but also in art. The dancer is proud to provide moral support to the National Army and to raise Azerbaijani flag on a pedestal.

Speaking about his biggest dream, Farid Kazakov said that his greatest desire is to perform in liberated territories of Azerbaijan. He stressed that the liberation of Azerbaijani lands would be impossible without President Ilham Aliyev.

The dancer noted that he was proud to be born on the same day with such an outstanding person.

"December 24 is a special day for me! It's a day when our whole country congratulates President of Azerbaijan Ilham Aliyev on his birthday. On behalf of the Azerbaijan's entire creative intelligentsia, I want to congratulate our Supreme Commander-in-Chief on his birthday and wish him all the best!', he said.

Despite the entire quarantine period, the dancer never stopped sharing his art with the public.

In September, Farid Kazakov was named the country's best young dancer. He won Khazar National Prize 2020 for his professionalism and devotion to dance art. This the second national prize awarded to the dancer.

It should be noted that last year, the dancer was also named "The Most Successful Dancer" according to "Trend of the Year 2019" Awards.

He surprised the audience with a one-man show "Enuement" staged by Russian director Louise Eyre, who worked with such famous actors as Nikolai Lebedev, Nikita Kukushin, Yan Tsapnik and others.

"Sometimes, we want to return to the past and tell ourselves what awaits us in the future: maybe to warn ourselves about envy and glory, triumphs and physical injuries. In this one-man show, I divided the space into: the stage (performances, applause and jubilant spectators) and backstage (pain, bruises, injuries and envious people), he added.

The one-man show was previosly shown at YARAT Contemporary Art Space. The performance was staged with the participation of Russian director Louise Eyre.The premiere was unforgettable and full house.

Since in 2018, the festival has been bringing together talented gymnasts. The festival's program included ballet, folk, modern dance styles, gymnastic, as well as vocal performances. Each performance was met with a storm of applause.

The video features Farid Kazakov, practicing choreography at the Moscow State Institute of Culture. The dancer immerses viewers into the wonderful world of dance art. The video aroused great interest among viewers.

Furthermore, the dancer hosted an open-air master class for students of "1001 nights" dance studio in Baku. The event was held in a warm and friendly atmosphere.

The dancer expressed his hope on holding more joint projects with the dance school.

"It is very pleasant to realize that there are gymnastics and dance schools of such high level in Baku. I am always ready to hold such creative meetings and master classes for future ballet dancers and contribute to the creative, professional development and prosperity of the future of Azerbaijani choreography, "Kazakov said.

Famous dancer has also taken part in a unique charity project, aimed at creative education of orphans and children with disabilities.

"Many children have never been to the theater and did not see dance art. I decided to give them a chance and show them the whole dance world, creating my new charity project "For Kids of Azerbaijan". The project features an art program which includes an open master class, where I show the daily exercise of a ballet dancer," he said.

Notably, the dancer is also engaged in charity projects in several organizations such as Ders Evi Education Center and Yaradan Creative Union.

In March, famous dancer Farid Kazakov and talented violinist Nijat Feyziyev performed with a fascinating concert during the quarantine.

On March 24, Farid Kazakov has been placed under quarantine, after arriving from Russia. The dancer decided to cheer up quarantined people with his performance.

In the Baku Olympic Village, he met a talented violinist, a graduate of the Baku Music Academy Nijat Feyziyev. The young talents delighted the audience with their performances.

Speaking about his future plans, Farid Kazakov stressed that he will continue to represent Azerbaijan's dance art at the international arena.

The dancer is going to take part in many creative projects. Farid Kazakov is also planning to please the audience with new performances and mono-shows. 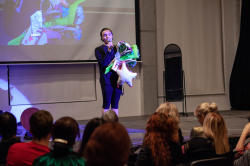