A stunning blues night has been held at the International Mugham Center.

Roy Young was familiar with Baku from the stories of his friend, a Baku resident and famous jazz singer Leonid Ptashka. But, Azerbaijan's capital and its public exceeded all his expectations.

His music is a celebration of sunny New Orleans jazz and the whole history of the present, filled with the passion of many generations of blues and swing 1950-1960.

His concerts are successfully held on the best stages of the world. Roy Young performed together with such stars as James Brown, Ray Charles, Bill Cobham, Billy Sheppard and Johnny Michael.

In Baku, Roy Young and King of Blues Band presented the works of such great musicians as Ray Charles, Lewis Armstrong and James Brown.

The audience admired not only his deep, fascinating voice, but also the ability to communicate with the audience and good humor. Each performance turned into a show.

Azerbaijani jazz singer Tunzala Gahraman was invited to the stage to perform a song "Hit the road Jack" by Ray Charles.

The whole evening, the public greeted the concert with enthusiastic cheers and applause.

At the end of the concert, the public did not want to let the musicians go and asked to perform the encore.

Russian musicians noted that the acoustics in the concert hall of the Mugham Center simply struck them. A cozy room, professional technicians, and most importantly, a receptive audience helped them to perform more effectively. 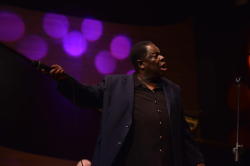 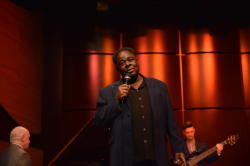