Azerbaijani culinary expert Ilkin Akperzade participated in the jury at the West African Food Festival (WAFFEST), which was held by the Chefs Association Ghana with the assistance of the World Association of Chefs' Societies.

The festival of West African national cuisine was held in  Accra, Ghana’s capital bringing together chefs from Ghana, Togo, Benin, Liberia, Lesotho and Nigeria.The winner of the festival became the chef from Ghana.

"The winners were chosen according to four criteria - preparation time, hygienic working conditions, taste and appearance of dishes. It is a great honor for me to present Azerbaijan at the festival, which was actively covered in the media of Western Africa," said Ilkin Akperzade.

The jury included representatives from the UK, South Africa, Nigeria and Ghana.

Ilkin Akperzade  is a chef-master, restaurateur. For many years he worked in Azerbaijan, Russia, the United Arab Emirates, Latvia, Finland, South Korea, Turkey and Iran.

Ilkin Akperzade is a host of TV programs. He was the chef of the Baku Islamic Solidarity Games 2017, the 2017 Summer Biathlon World Championships in Tchaikovsky (Russia), the Winter Olympic Games 2018 in Pyeongchang (Republic of Korea), etc. 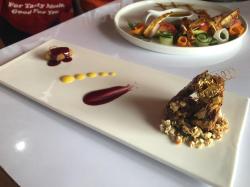