The event was attended by representatives of diplomatic missions accredited in Azerbaijan, famous figures of culture and art.

The main theme of DokuBaku 2018 is the crossroads of fates, concepts, worldviews, events and various phenomena of life. Everything can be different, but the general is still intersected at some point in time or space.

Addressing the festival's opening ceremony, one of the organizers of the project, Aysel Akhundova, stressed that DokuBaku Festival is being held for the second time. The program DokuBaku-2018 has become more interesting and extensive.

Then the word was handed over to the jury members of the short film competition - Honored Art Worker, Culturologist, art historian Jahangir Selimkhanov and the first adviser to the EU representation in Azerbaijan Denis Danilidis.

It was emphasized that DokuBaku festival was organized on the initiative of young and talented people, full of energy and creative ideas.

Screenings will continue until October 9 and will take place in six different locations across central Baku.

The festival started with the opening film, "Ouaga Girls"(2017) at Baku Puppet Theater.

The film "Ouaga Girls"(2017) is about a group of young women from Ouagadougou who study at a girl’s school to become car mechanics. The protagonists are right in the middle of a crucial point in life when their dreams, hopes and courage are confronted with opinions, fears and society’s expectations of what a woman should be. Using interesting narrative solutions, film director Theresa Traore Dahlberg depicts their last school years and at the same time succeeds at showing the country’s violent past and present.

Screening of the film was followed by discussion with gender specialist Shams Mustafayeva attended the event.

DokuBaku International Documentary Film Festival is a new independent film festival organized by a group of filmmakers on a voluntary basis. Within the framework of the festival there are screenings of films, master classes, as well as discussions and debates on social issues with the participation of local and international filmmakers. The main goal of the project  is to encourage Azerbaijani filmmakers to create documentary films. 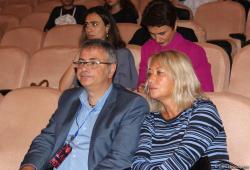