Representatives of the European Union of Gymnastics (UEG) visited Baku on Feb. 27-28, Trend reports referring to the Azerbaijan Gymnastics Federation.

They arrived in the Azerbaijani capital to discuss the organizational issues on the two European Championships, to be held in Baku in May. During the visit, they held two meetings with the local organizing committee of the Azerbaijan Gymnastics Federation. At the meetings devoted to aerobic and rhythmic gymnastics, issues related to the preparation of the hall, media, accreditation, work with volunteers, etc. were discussed.

A draw of the championship in rhythmic gymnastics will be held in Baku on March 2. 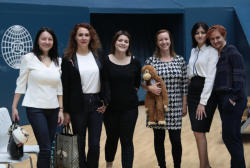