The meeting between Charge d'Affaires of the Embassy of the Kingdom of Spain in Azerbaijan Ignacio Sanchez Taboada and representatives of the Azerbaijan-Spain Working Group on Inter-Parliamentary Relations was held in the Azerbaijani parliament, Trend reports.

Head of the Working Group, MP Sevil Mikayilova and member of the group, MP Tural Ganjaliyev attended the meeting.

The sides emphasized that both countries are suffering from separatism. Taboada was informed that Armenia has been holding 20 percent of Azerbaijani territory under occupation for more than 25 years, in response to which the UN Security Council adopted the resolutions #822, 853, 874 and 884.

In conclusion, a decision was made to organize introductory meetings between the members of the group and the Spanish parliamentarians to intensify the activity of the working group. 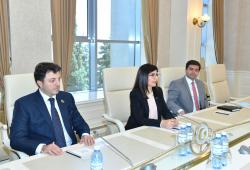 US ambassador to Azerbaijan, USAID director meet with Azerbaijani MP