He made the remarks during a meeting with the delegation of the Defense Ministry of Saudi Arabia, led by Major General Ali bin Ibrahim Fevvaz.

Having greeted the guests, Hasanov brought to their attention the instructions of the President of Azerbaijan, the Supreme Commander-in-Chief of the Armed Forces Ilham Aliyev about the expansion of relations and cooperation between Azerbaijan and Saudi Arabia in all areas, particularly in the military and military-technical spheres.

Touching upon the security issue in the region, Hasanov expressed gratitude for Saudi Arabia's support of Azerbaijan's position in the solution of the Nagorno-Karabakh conflict and for non-establishment of diplomatic relations with Armenia.

Fevvaz, in turn, noted that Saudi Arabia regards Azerbaijan as a friendly and fraternal state and attaches great importance to military cooperation between the two countries.

The guest added that as a Muslim country, Saudi Arabia strongly condemns Armenia's aggressive policy and is constantly close to Azerbaijan in its rightful cause.

During the meeting, the parties also discussed issues of strengthening ties between the armies of the two countries, holding joint military exercises, organizing visits, as well as a number of other issues of mutual interest.

Saudi Arabia was one of the first countries to recognize the independence of Azerbaijan in 1991.The diplomatic relations between the two countries were established in 1992. The Azerbaijani Embassy in Riyadh was opened in 1994, and since 1999, the embassy of Saudi Arabia has been operating in Baku.

Over the past years, the bilateral economic relations with the increased interest in investment strengthened and expanded. Currently, several companies of Saudi Arabia operate in various fields in Azerbaijan. 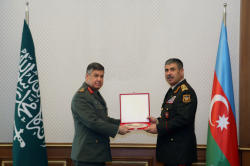